During a Greek parliamentary session on May 2, 2020, the special standing committee on armament programs and contracts validated several programs for the Hellenic Navy.

According to an official Greek parliament document, the committee has approved several armament programms that among others accelerate the strenghtening of its fleet. The Hellenic Navy is in the final stage of activating the sub-programme for the procurement of four Sikorsky MH-60R anti-submarine warfare helicopters, according to a written statement to the Parliament made by the Minister of Defense Evangelos Apostolakis.

The approval concerns the acquisition of four MH-60R helicopters with the option for an additional three as it was mentionned last year by the former Minister of Defense Evangelos Apostolakis. The U.S. already approved the sale. The delivery is expected in 2022. Last year, the U.S. State Department approved a similar deal for the Indian Navy. So far, the Romeo has been selected by the navies of the United States, Saudi Arabia, Denmark, Australia, India and Greece. 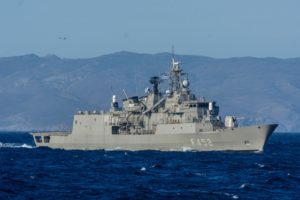 Another program that received authorization was the long awaited modernisation of the four MEKO 200HN frigates with an allocated budget of 160 million euros. The overall cost of the program will be higher as a series of additional engineering and maintenance works will be funded by a separate account.

The final configuration of the frigates will depend on the cost of each proposal, but the Hellenic Navy is prioritizing the upgrade and integration of a series of systems. According to the Greek magazine Ptisi these include, among others, the combat management system, the radar with a new 3D one, the navigation radar, the intercom system, the integration of a laser warning system, of two RWS with 20 or 30 mm guns and of a Link 16 with the ability to upgrade it at Link 22.

It is not clear yet whether the Hellenic Navy plans to award individual contract for each systems or if a prime contractor will be selected.

Two additional programs that received authorization were for the certification of UGM-84 Sub-Harpoon missiles and other systems to the Type 214 submarines, as well as the platforms’ maintenance.

A contract to build three boats for the Hellenic Navy was signed 15 February 2000 and a fourth unit was ordered in June 2002. The first boat was built at HDW in Kiel, Germany and the rest at the Hellenic Shipyards Co. in Skaramangas, Greece. The Hellenic Navy named them the Papanikolis-class. Finally, the document stipulates that the delivery of the Hellenic Navy’s sixth of seven Super Vita / Roussen-class fast attack craft missile (FACM) should take place on June 1st, 2020, in order to bring it into operational service as soon as possible. If the contract is not fulfilled, construction would be completed by the Hellenic Navy itself. It has already conducted short sea trials last year. As of June 4, the vessel was inducted into service. The seventh and final unit is under the final construction phases and will be delivered in due time.

It is understood from the extremely short delivery times and the number of approved programmes that Greece is under extreme pressure due to the situation with Turkey and is seeking to strengthen its maritime capabilities as soon as possible.

No decision yet on new frigates

One big program missing however is the potential procurement of two FDI Frigates from France. That program is still under discussions, as the two sides are finalizing the vessels’ configuration and costs, before any final decision is made.